Emily Neufeld’s Prairie Invasions: A Hymn, an auto-ethnographic encounter with the settler-colonial expropriation of the Prairies, has entered its final month at the Southern Alberta Art Gallery. Previously titled Prairie Invasions: A Lullabythis body of work was first exhibited at the Richmond Art Gallery in 2020. The title change echoes “A Fable for Tomorrow,” the first chapter in Rachel Carson’s 1962 ecological manifesto Silent Spring, and serves as a pivotal entry point into the exhibition as the artist reflexively maps the path of her Mennonite ancestors across a prairie geography filled with nation-building memory, scars, and still-bleeding wounds. 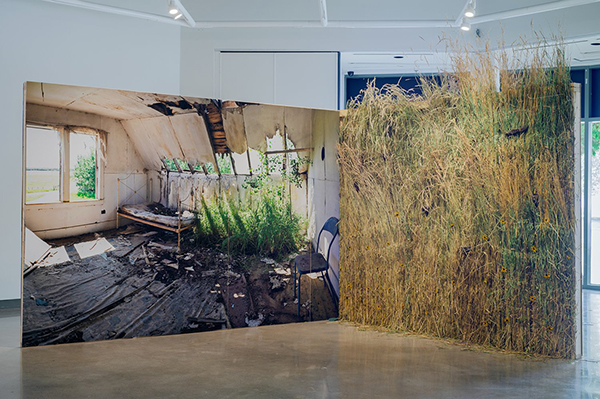 In Prairie Invasions: A Hymn, reflexivity surfaces thematically and materially. Neufeld reflects on her biographical relationship to the prairie as the progeny of an invasive population – not unlike the blackberry bush or the barn swallow that followed. Acknowledging the complex forces of migration, she differentiates between the invasive and the introduced; the former takes over aggressively, the latter integrates symbiotically. The topic of settledr-indigenous reconciliation is dominant in written contributions to the exhibition – the online press and the accompanying essay by Nura Ali – but remains muted, referenced only symbolically, within the layered poetics of the work itself. The exhibition remains a meditation rather than a treatise.

Materially, Neufeld’s sculptural work adopts various forms of inversion, reconstitution, and repetition. Most striking is the triptych of light boxes, Bruce’s 2, Schilling’s, Nokomi’s, that bind the horizontal expanse of “big sky country” into plexiglass cylinders, inverting the panoramic linearity and restricting the viewer to see only sections of the landscape at once. In this way, the viewer is invited to join Neufeld in the observational practice of walking. 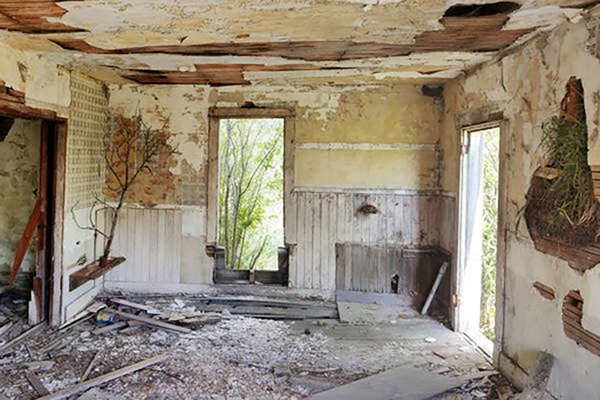 Large photographic murals Beach’s House and Larry’s House, mounted vertically on newly studded and paneled walls depicting interiors of condemned 19th-century farmhouses that Neufeld sculpturally and photographically intervened with as part of her 2018 research. Seeing these derelict interiors, their decomposition momentarily paused by the camera and then reconstituted on plumb walls of seasoned lumber, reads as an expression of restorative nostalgia.

The idea of ​​nostalgia as an elusive psychopathological condition is dissected by Svetlana Boym into reflective and restorative nostalgia in her comprehensive historical analysis The Future of Nostalgia. Boym writes that “contemporary nostalgia is not so much about the past as about vanishing the present,” and the restorative sensibility underlying Prairie Invasions: A Hymn Confirms that this nostalgia is not rooted in a desire to resurrect a settler past, but to renew a settledr relationship to the prairie in the present – ​​one that is grounded on introduction rather than invasion.

Touring the exhibition clockwise, the final work is a video of Neufeld exploring desolate farmhouse properties from the shaky GoPro vantage point of her young son Behailu. The video reads tautologically at first, utilizing raw footage to supplement and legitimize the documentary realism of the photographic and sculptural work. At second glance, however, Behailu’s third person point of view, for the first time in the exhibition, incorporates Neufeld into the work as an actor, not simply as a spectator. The digital video, with 4K clarity and high frame rate, is anything but nostalgic, and its inclusion helps bridge the somewhat arduous gap between the accompanying literature and the work itself.

Tyler Muzzin is an artist and writer from Innerkip, Ontario currently based in Lethbridge, Alberta. Recent solo exhibitions include The Town Musicians of Bremen (and Elsewhere) at Gallery Stratford (2021) and The Great Dark Wonder commissioned by Burlington Public Art in 2019. His critical writing has been featured in Momus (2020) and Peripheral Review (2021). A forthcoming essay on the work of Common Collective at the Woodstock Art Gallery will be published in February 2022. Muzzin is currently a sessional lecturer in the Faculty of Fine Arts at the University of Lethbridge.